Put down the tube and pick up the tuber. The secret to firm, glowing skin is hiding in your kitchen. 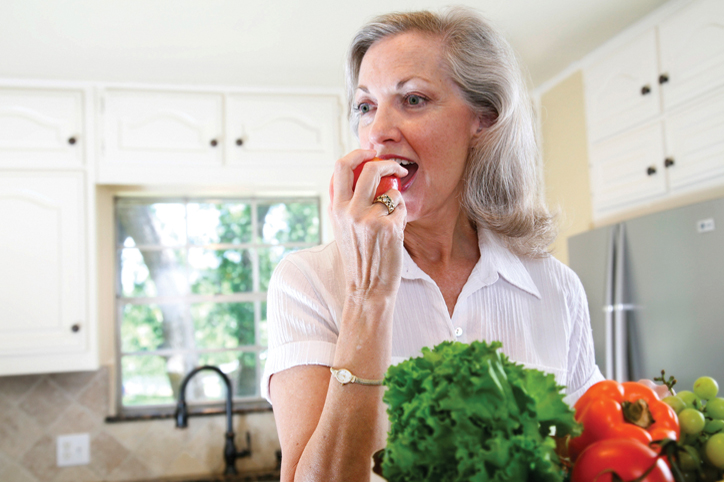 Each year, Americans drop $10 billion on lotions, moisturizers, and other products to keep our skin looking young, clean, and fresh. But what if the best-kept secret to healthy, beautiful skin is actually in your kitchen cabinet, not your medicine cabinet?

Much of the science behind an antiaging diet comes down to two things: antioxidants and free radicals. We’ll spare you the science lesson, but suffice it to say, free radicals are bad guys. They roam around the body damaging cells, proteins, and even your DNA.

The aging process itself is the result of free-radical damage that happens over decades. These rogue molecules occur naturally, so there’s no stopping them completely. But poor lifestyle choices—everything from smoking to too much sun exposure—can accelerate their creation.

Antioxidants, meanwhile, are good guys. They patrol your body, spot free radicals, and cuff them so they can’t do any harm.

“Our body relies on antioxidants to prevent free radicals from raging out of control,” says Rajani Katta, M.D., a dermatologist in Bellaire, Texas. But unfortunately, the human body can’t generate antioxidants on its own, and supplements aren’t as effective as real food.

This fruit (it’s not a vegetable—true story) is one of the most nutritionally potent. It’s packed with a number of skin-saving nutrients, including vitamin C, beta-carotene, lycopene, and vitamin E—all antioxidants.

Raw tomatoes are both delicious and nutritious, but you can maximize their antioxidant potential by cooking them or using precooked canned products like tomato paste.

A study in the Journal of Agriculture and Food Chemistry found that cooking tomatoes for two minutes increased their lycopene content by 6 percent, while 15 and 30 minutes of cooking time bumped up lycopene by 17 and 35 percent, respectively.

The omega-3 fatty acids found in extra virgin olive oil strengthen cell membranes. The healthier these membranes, the better they retain water and the younger your skin looks.

Drizzle a little over a sliced tomato salad—or add a few tablespoons to your next sauce recipe—to create a skin superfood combo. Researchers at Ohio State University found that consuming oil with tomatoes increases your ability to absorb the tomato’s lycopene. It’s also pretty tasty!

Omega-3 fatty acids are also found in salmon, flaxseed, and walnuts, among other foods. And don’t think fish-oil supplements will give you the same benefits. Recent studies have cast doubt over their efficacy, partly because the body doesn’t process the nutrients as well.

Vitamin C doesn’t just boost immunity. It also combats aging by promoting the synthesis of collagen and elastin—proteins that keep your skin firm and elastic, respectively.

“Vitamin C is also necessary for the sustained action of vitamin E in our skin,” says Dr. Ploch, “and it increases the bioavailability of selenium.” Translation: You need plenty of this vitamin if you want to get the most from several other skin-saving nutrients.

While you might naturally think oranges, kiwi actually tops them (and just about every other food out there) in terms of vitamin C content. One cup provides 170 milligrams.

And keep the skin on. That’s where the fruit derives much of its nutritional benefit. If the green kiwi’s fuzz is a turnoff, track down the golden variety. Its skin is smooth, and the fruit has roughly the same nutritional profile.

This vegetable is a top source of the antioxidant beta-carotene. “Beta-carotene and carotenoids like it contribute to normal skin color and help protect us from UV damage,” Dr. Ploch says.

In addition, beta-carotene helps repair tissue and clear away dead skin. You can also get a strong dose from carrots and squash.

Selenium is the key ingredient here. While you’ll find plenty in tuna, turkey, beef, and shellfish, just one Brazil nut will give you a whopping 137 percent of the daily recommended intake. But stick with just one or two Brazil nuts per day, Dr. Ploch says, because too much selenium has a host of unsavory side effects, such as hair loss, fatigue, and irritability.

Selenium works with vitamin E to create a protective layer around cell membranes, which neutralizes the negative effects of free radicals. It also works with vitamin C to help preserve elastin. And as a component of an antioxidant called glutathione peroxidase, selenium has been linked to lower risk of skin cancer.

The link here is zinc, which helps wounds heal quickly. It also protects skin from excessive UV rays. In fact, many sunscreens use zinc oxide as an active ingredient, Dr. Ploch says.

Nothing tops oysters when it comes to total zinc content. One serving contains almost five times the daily recommended intake. That’s a lot. And while excess dietary zinc isn’t a health risk, it can cause gastrointestinal discomfort, so save oysters for special occasions.

Instead, beef up on beef. A three-ounce serving contains almost half the daily recommended intake.

Vegetarians, meanwhile, should lean on the bean. Though plant-based sources of zinc aren’t as potent as animal-based sources, a serving of baked beans has about 20 percent of the daily recommended intake, and the same amount of chickpeas has roughly 10 percent.

SilverSneakers gives you free, unlimited access to more than 16,000 gyms and fitness centers across the nation, plus classes and tools designed to keep older adults strong and independent. Check your eligibility instantly here.

Already a member? Get your SilverSneakers member ID and exclusive content by logging in to or creating your online account here.